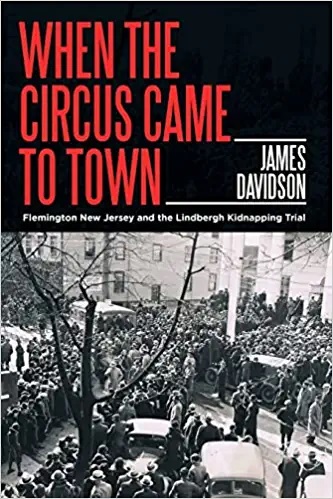 When the Circus Came to Town: Flemington During the Lindbergh Kidnapping Trial In-Person

So, how crazy was it in Flemington during the Lindbergh baby kidnapping trial?

Find out on Thursday, Oct. 13 at 7 p.m. when the Hunterdon County Historical Society welcomes author Jim Davidson, who will discuss his new book When the Circus Came to Town.

While much has been written about the 1934 trial of the kidnapping of the first son of Charles and Anne Lindbergh, Davidson offers a unique local angle by exploring what happened when the world suddenly became focused on Flemington. As the “The Trial of the Century” was getting started, the town saw 50,000 people arrive, including more than 700 reporters, 150 photographers and countless sketch artists.

Davidson will weave together a fascinating collection of tales featuring an array of colorful characters associated with the kidnapping trial of Charles and Anne Lindbergh’s first son, Charles Lindbergh Jr. You’ll hear about famous reporters and radio personalities such as Adela Rogers St. Johns, Damon Runyon, Dorothy Kilgallen, Walter Winchell and Gabriel Heater. And you’ll hear about locals such as from locals like Sheriff John Curtiss, Defense Attorney C. Lloyd Fisher (who represented Bruno Hauptmann), and jurors including Charles Walton and Verna Snyder.

During the trial, Nellie’s Bar in the Union Hotel became a landmark for those who got to drink there while prostitutes roamed the streets, paying newsboys tips for “Johns.”

The program is free but space is limited. Email hunterdonhistoryadm@gmail.com to reserve your seat. Additional information can be found at www.hunterdonhistory.org.